Dear Father,
I have enlisted for Service in the Expeditionary Force, but do not know as yet whether I have been accepted. I go to Timaru on Friday for medical examination and will wire you if I am accepted and write full particulars. I will probably know by the time you receive this. There are some sixty enlisting from Waimate. Major Wain has been appointed second in command of the Sth Canterbury forces.
Until Friday. Best Regards to all.
Your affectionate son,
Rawei

Notes: Max was working as a banker in Waimate. England officially declared war against Germany on 3 August, 1914, so he enlisted as soon as enlistments began. He was 22 years old at the time.
Posted by Miss Smith at 1:25 PM 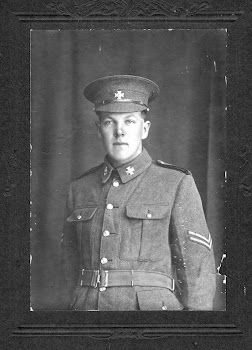 Douglas Rawei McLean was known as Rawei to his family, Mac or Max to his friends and his wife, and very much later in life, as Douglas. He was born in 1892 and enlisted for active service in August, 1914. He died at the age of 84, in 1976.

Hello, and welcome. Douglas Rawei McLean was my grandfather. He served in the WWI ANZAC forces from 1914 to 1918, and fought in Gallipoli and Europe. We are lucky enough to have the letters that he wrote home during that time, and some photos. This blog is a place for me to share these with our extended family, and anyone else who is interested. I am posting them one at a time, as I get around to typing them, and they are in order from the beginning. The originals of these letters are now housed at the Alexander Turnbull Library, New Zealand.

Questions/Comments: Please feel free to email me at misssmithathome@gmail.com